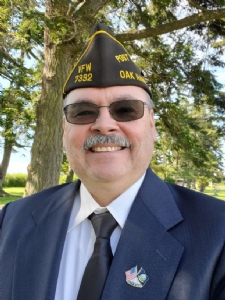 On 1 April 2009, he reported to USS SHOUP (DDG 86) at NS Everett, WA.  While assigned to SHOUP, the command earned a Battle "E” award, the Golden Anchor award for retention excellence, and completed a deployment with the ABRAHAM LINCOLN Battle Group.  During this deployment, SHOUP spent over two months in the Somali Basin and attended eleven Theater Security Cooperation Events in the FIFTH, SIXTH, and SEVENTH Fleets, including a Christmas visit to Haifa, Israel, and the 2011 Avalon Air Show in Melbourne, Australia.

Command Master Chief Bond qualified as an Enlisted Surface Warfare Specialist (ESWS) on December 7th, 1987, aboard USS STERETT (CG 31).  He was assigned the Fleet Marine Force (FMF) designator in 1991 during Operation Desert STORM while serving in combat with the First Marine Expeditionary Force (I MEF).  And he qualified as an Enlisted Aviation Warfare Specialist (EAWS) 04 July 2006 while assigned to VAQ-133.  He is a "Top Graduate” of the Surface Force Independent Duty Corpsman School (SFIDC), he attended the Senior Enlisted Academy (Class 122 - Brown), and he completed the CMC/COB Course (Class 24).  He holds a Bachelors of Arts Degree from Columbia University of Missouri and a Master Degree from the University of Southern California (USC)’s School of Social Work.

He is married to the former Gerlie Deleón Mamaril from Las Pinas, Philippines, and resides in Oak Harbor, WA.  He retired from the United States Navy October 1, 2013, after more than 30 years of faithful and honorable service.

After moving to Whidbey Island, Chuck transferred his Lifetime Membership to the Whitehead-Muzzall VFW Post #7392 since 2014 he continues to serve as its Service Officer.  He was the recipient of VFW Washington State Department Humanitarian Service Award in 2017-2018 and was installed as its Junior Vice Commander in 2020.